Do you want to easily convert HTML to Markdown? Simply by copy & paste?

I've a series of HTML blog posts written in HTML with TinyMCE which I want to convert to Markdown Extra. There are several scripts for this task:

Neither really satisfied me. Furthermore, I want to convert my blog posts with saving all of them to a file. I've written a little JavaScript script.

As I'm using regex the conversion is limited. The HTML must be well formed without errors. Simply, <p> <br> <strong> <em> <h1> <h2> <h3> <h4> <h5> <a> <li> <table> are replaced with the Markdown equivalent. Thus, a conversion using this script is not fully automatic. But for my task perfect.

There is an overview on a Japanese site.

We examined a few libraries and tools that convert HTML to Markdown notation.

You don't want to be embedded in the app, but you just want to re-edit the article before moving to Markdown with WordPress, or when the post text changes from Markdown to HTML after conversion due to something wrong. It is a request to return to. I found a lot if I was investigating.

※ There is something that I tried for a while, but it is unverified that conversion can be done without problems properly. There are various extension notations, so I changed it to "○" if it felt like it was a bit compatible.

What I want to pay attention to the conversion behavior is that if you can mix Markdown + HTML like the body of WordPress, the information will disappear if the script tag etc. is not output as HTML as it is after conversion. A proper (?) Library contains an action to delete script tags that do not have meaning as a document, and conversely, a simple conversion library simply replaces HTML tags and outputs tags that can not be handled as it is It is done.

In the following, what is expressed as early Markdown is Markdown 1.0.1 that does not include an extension . I do not know if the library is actually 100% compliant. 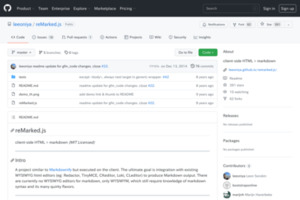 reMarked.js is a JavaScript library that supports not only the initial Markdown notation but also the table. The demo site can convert specified HTML text, which is useful when you want to convert a little. It is used by pronama.jp/md .

A variety of conversion options are also featured (not available on the demo site). By default, the contents of script are not output, but you can also specify optional tags to output or not. 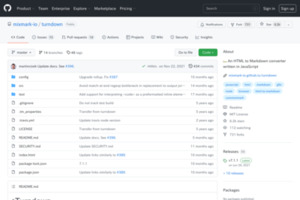 to-markdown is a simple JavaScript library. The site has a bug related to blockquate, but unfortunately it seems that development has stopped.

Simple HTML can convert it without any problems, and you can try it on the demo site right away. The content that can not be converted is output as it is. 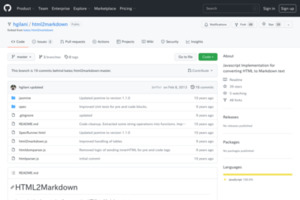 It seems that conversion is done using HTML Parser library. I have not tried. 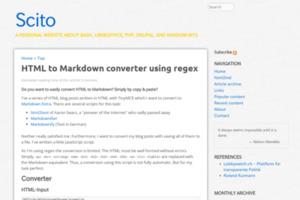 A simple JavaScript code is available that converts HTML to Markdown with regular expressions. The function is limited, but the extension notation is included. 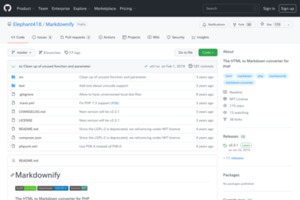 Markdownify is a library that supports Markdown Extra . You can also convert table and HTML attribute values ​​to Markdown.

It was an impression that most supported the extended notation (though I do not know how well it can be converted). However, development has stopped in the state where the official site is down.

HTML To Markdown for PHP 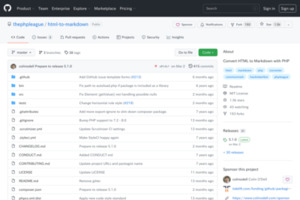 HTML To Markdown for PHP is a PHP library that supports early Markdown. It has less features but also conversion options. 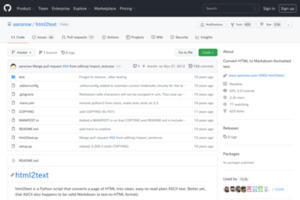 html2text is an old Python library. It corresponds to the early Markdown notation. There is a demo for converting web pages from URLs, but it almost feels like a failure.

Content that can not be converted is deleted. Again, reading the code provides conversion options, but not all output settings.

It is an impression that there are a lot of tools that use html2text or because of an old library. Tools for OS X Markdown Service Tools were also used. 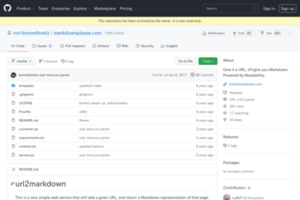 url2markdown is a library to get web page from URL and convert it to Markdown. The conversion part is html2text. However, I use Readability's Parser API for fetching web pages, and the results are old and information is lost. 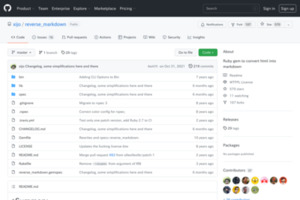 reverse_markdown is a gem-style Ruby library. I have not actually tried it, but according to the explanation, table is also supported. 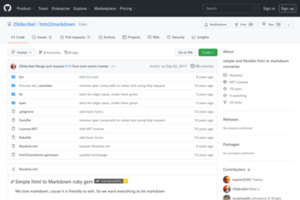 html2markdown is also a gem-style Ruby library. Only simple conversion is supported, as described in "Simple html to Markdown". It was also in Bitbucket . 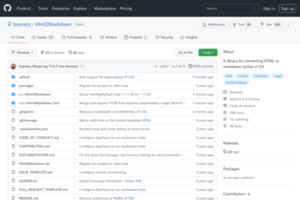 Html2Markdown is a C # library, also published by Nuget . Looking at the code we have a fairly simple conversion. 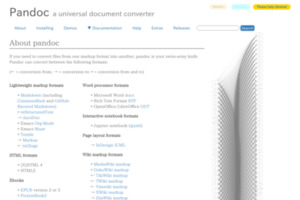 Pandoc is a tool that can convert various document formats. HTML to Markdown is also possible. It supports various Markdown notations. However, the result of table was subtle with missing columns. The details of Pandoc are as follows.

HTML-Supports a variety of formats! Get to know the document conversion tool Pandoc-Qiita 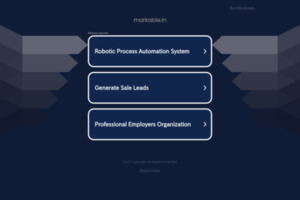 Markable is an online Markdown editor. I will introduce HTML to Markdown conversion function. Once you register your account, you can use the HTML import feature. The conversion from HTML seems to support only the initial Markdown notation, but the Markdown to HTML conversion function also supports extended notation such as table.

In the online editor examined, only Markable supported conversion from HTML.

At first I found only a few libraries and checked their operation, but if you search frequently you will come out a lot. Everyone's making it.

If you want to convert a bit, reMarked.js demo site is useful. ReMarked.js itself seems to be the end goal to integrate with the existing WYSIWYG HTML editor.

Please let me know if you have any other information or mistakes.

Has the article been interesting? Would you like to share it?
27.01.2013 (modified on 08.06.2019) – scito
‹ Previous article
Next article ›
Subscribe
It always seems impossible until it is done.
Nelson Mandela